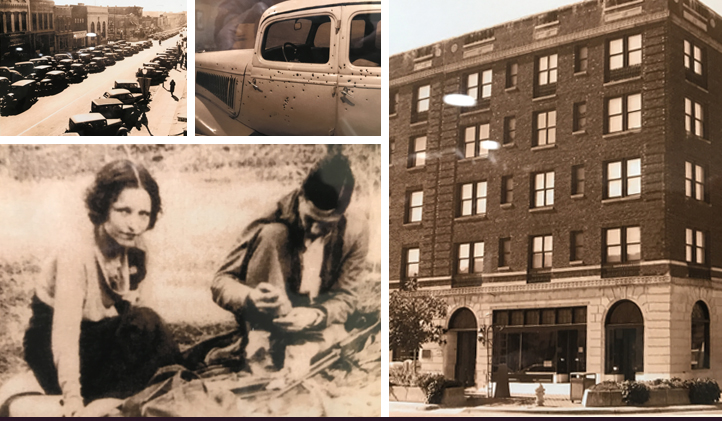 1932 – The Bonnie & Clyde Gang Stay at the Eldridge Hotel… and rob the bank across the street!

Running with Bonnie and Clyde:

In Lawrence the three men checked into the old Eldridge Hotel. There they spent the remainder of the first day observing the First National Bank at the corner of Eighth and Massachusetts. The bank was active, which bothered Fults and Barrow. A large crowd might prove hard to handle. Fults decided to take a closer look by changing a ten-dollar bill at the teller’s cage.

In 1932 bank robbery was on the increase. Many banks began stationing armed security agents in cage-like balconies above the lobby. However, on that day Fults could see no such installation, just a loan guard leaning placidly against the front door jam. The many customers still posed a problem.

The following morning at 8:45 a.m. the bandits noticed the bank president stroll up the street and let himself into the building. For nearly ten minutes he was alone inside. Eventually the other employees began to arrive. The next morning the same thing happened. Barrow, Fults, and Hamilton knew what to do.

“Lets do it tomorrow” said Barrow. Fults and Hamilton nodded in agreement.

At 8:45 a.m. the following morning the bank president came strolling up the sidewalk, just as he had done the previous two mornings. Barrow and Fults stepped from their car, adjusted the sawed-off shotguns beneath their overcoats, and crossed the square to meet the unsuspecting banker. Hamilton waited in the car, just as they walked up to their intended victim, the two bandits spotted a man and a woman approaching from the opposite direction. They were bank employees. There was little time to lose. Fults walked over to them. Barrow approached the president.

“This is a stick up,” said Clyde. “Don’t raise your hands and don’t try nothing funny.”  The startled man fumbled with the keys for a few seconds before calming down enough to turn the latch on the front door. “We ain’t going to hurt nobody.” Barrow added, following Fults and the three victims into the empty bank “we just want the money.”

Fults, .45 in one hand, shotgun in the other, stood guard while Barrow accompanied the president to the main vault. The outlaw soon reappeared, hauling two large sacks of currency. While the rest of the bank’s employees were being hustled into the vault, Fults stepped over to the window and motioned for Raymond to bring the car around.

The bank robbers never looked back. Speeding from town, they switched to a backup car without incident. If a posse was ever organized the bandits saw no evidence of it. They did not even see the bank guard. Nothing stood in their way as they fled east across two state lines.

“Are you sure?” asked  Barrow.

“Hell yes,” Fults answered. “Here, count it for yourself”