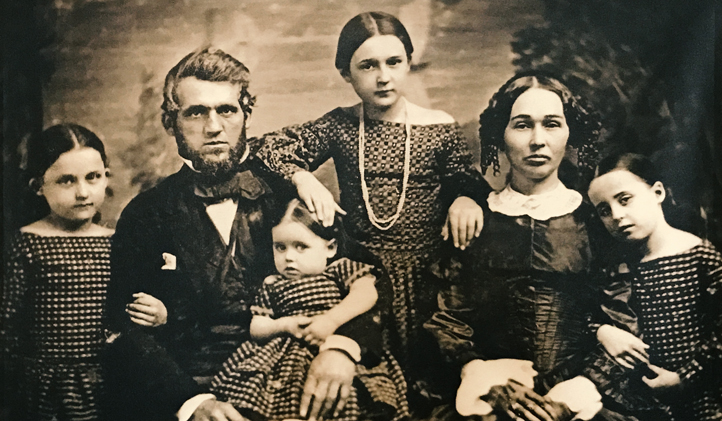 The Eldridge Hotel has been an integral part of the history of Lawrence since its founding. The original building on this site was the Free State Hotel, built in 1855 by settlers from the New England Emigrant Aid Society. The Free State Hotel was intended to be temporary quarters for those settlers who came here from Boston and other areas while their homes were being built. It was named the Free State Hotel to make clear the intent of those early settlers: that Kansas should enter the union as a free state.

In 1856, the Free State Hotel was attacked and burned to the ground by the infamous sheriff Sam Jones, heading a group of pro-slavery forces. Colonel Shalor Eldridge rebuilt the hotel and added another floor, vowing to do the same every time it was destroyed. The hotel stood until 1863 when it was attacked and destroyed once again, this time by Quantrill and his raiders. Quantrill and his men rode into the community of Lawrence and killed more than 150 people. Tragically, they burned and destroyed the city that stood as a proud symbol and home for the free state of Kansas and the freedom and rights of individuals everywhere.

Colonel Eldridge promptly rebuilt the hotel and gave it his name, the Hotel Eldridge. To this day, the seal of the city of Lawrence depicts a phoenix rising from the ashes. Its motto is “from ashes to immortality”. The seal and motto exhibit the determination by the people of Lawrence to stand and fight for the rights and dignity of people everywhere.

The Eldridge Hotel stood until 1925 as one of the finest hotels west of the Mississippi River and continued to play an important role in the early development of Lawrence and the state of Kansas. By 1925, the hotel had begun to deteriorate. A group of Lawrence business leaders were organized by Billy Hutson to tear down and rebuild The Eldridge Hotel because of its importance to the city of Lawrence, and restore it to its former place of dignity and elegance. Billy Hutson fully committed himself and his life savings to the project. The community stepped forward and made the investment necessary to insure the success of this important undertaking.

By the late 1960s, trends had changed. Motels were springing up all over the country and downtown hotels were becoming less popular. The Eldridge Hotel was not immune to these forces and it finally closed its doors as a hotel on July 1, 1970. (In fact, a key had to be made to lock the front door because it had been lost many years earlier.) The hotel was converted to apartments and it remained that way until 1985. In that year, a Lawrence developer organized a group of investors to do just as Billy Hutson did decades earlier – commit to the noble notion that The Eldridge Hotel would live again. And so began the next rebirth and renovation of our historic hotel. The city of Lawrence supported this project by committing $2 million in industrial revenue bonds to match the $1 million in private money raised by the investors. The top four floors of the hotel were completely rebuilt and converted into 48 two-room suites.

In October of 2004 the hotel was sold at auction to a group made up of University of Kansas Alumni and local investors. After four months beginning in January 2005, during which the hotel was closed, a multi-million dollar renovation project restored the building to its original 1925 grandeur. Reopening in May 2005, The Eldridge once again assumed its role as Lawrence’s premier hotel, occupying the most historic corner in Kansas. The Eldridge truly is the place where history and hospitality converge.